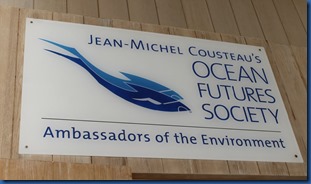 Jean-Michael Cousteau is the David Attenborough of the subaquatic world. A generation of sea lovers, like myself who watched it diligently as a child, were inspired by his prime time “The Undersea World of Jacques Cousteau” (a sample episode of sharks is featured below). He never shot an episode from the Maldives, though in 1997 the ubiquitously marine Maldives honoured him with a postage stamp (see bottom). But Ritz Carlton Maldives has brought his enduring legacy to the Maldives with their “Ocean Futures Society” collaboration with Jean-Michael Cousteau (Jacques’ son) which is carrying on the family mission to inspire people around the world with not just appreciate the aquatic world, but to take care of it.

The centre has sponsored six projects at the Ritz Maldives. One is exploring the concept of coral reefs as “underwater cities”. The notion described in Richard Murphy’s “Coral Reefs: Cities Under the Sea” postulates that all coral reefs have species who do different “jobs” (such as janitor, policeman, builder, farmer, etc. Curiously. which species do which roles varies from coral reef to coral reef. 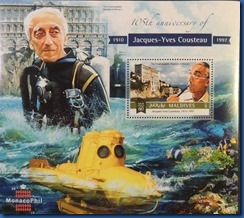