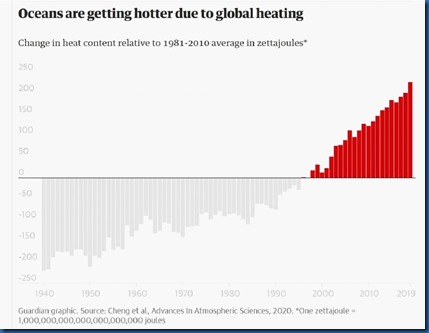 Few places provide the perspective the Earth’s vastness as effectively as standing on the seashore and gazing out on the vast expanse of the ocean. The level horizon provides an uninterrupted vista of the planet allowing the view to extend miles and miles (well, 3 miles about). A dip into this immensity adds the dimension of depth as you realise that this body of water plummets to fathoms below. In fact, the lowest point down in the ocean (Challenger Deep 36,200 feet) is deeper than the highest point up on land (Mount Everest 29,029 feet).

This immensity cloaks the blue planet in not just an aquatic wonderland, the birthplace of life and countless resources, but it regulates the world’s climate significantly. It absorbs and releases heat and water constantly. And with the inexorable release of Anthropocene carbon into the atmosphere and the consequential inching up of average temperatures, the oceans are doing their bit to absorb both.

The problem is that when the oceans absorbs carbon it makes the seawater more acidic which makes it less hospitable for a lot of its creatures. Also, when it absorbs the heat, it raises the water temperature which makes it less hospitable for the one of the pillars of the marine food chain – the coral reefs. The result is the widely reported bleaching and dying of the reefs. Over the two decades we have been visiting the Maldives, we have applauded the destination growing in many exciting ways, but each year (especially recently) we despair at the painful shrinking of the living coral primarily due to the warming sea temperatures.

In the Maldives, the reefs are not just foundation to the ecosystem, but the entirety of the county’s very being. As such, the country has been on the vanguard of campaigning for eco-sustainability and cutting carbon emissions. With the global prominence of Time’s Person of the Year Greta Thunberg and the impassioned television series by famed naturalist David Attenborough “Life on Our Planet”, the scale of carbon impact is getting a higher profile than ever.

But just how big is the impact right now? Forget all of the controversial models and forecasts. Forget the graphs showing tonnes of carbon emitted (as few of us are chemistry experts to know what all that carbon really means). Let’s just look at the actual, observed real world impact today of that carbon and climate change with a easily obtained and verified measurement – the temperature of the ocean.

I’ve happened upon a couple of illustrations of ocean temperature increase recently which prompted this post. The first from the Futurism website noted that

But a possibly even more dramatic number and comparison is the simple quantification of the energy that the ocean has absorbed – an accelerating at average of 10 zetta-joules per year(and last year was over 200 zetta-joules added). ZETTA joules. You don’t know what that is? Not surprising since it is such a big number there really aren’t many things in the universe to apply it to. A “zetta” is “10^21” (1 with 21 zeros after it).

Posted in: Other \ Tagged: eco-sustainability, ocean