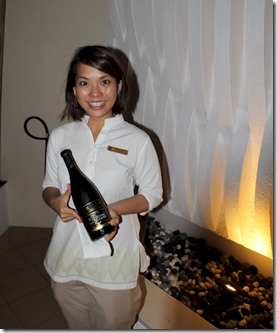 The Maldives are renowned for their legendary sunsets, but the night time celestial displays of stars and moon are equally as dazzling on the light-pollution free skies reflecting on the glass-like seas below. The full moon is always an occasion for a special celebration and tonight’s full moon marks the Chinese Mid-Autumn Festival in particular.

The event is a time of coming together with friends and family for prayers of thanksgiving for the harvest bounty. Like the American Thanksgiving holiday, there is plenty of feasting and to compliment the cornucopia of foods, Shangri-La Villingili offers the most exceptional range of Chinese libations…

The catalogue above is compliments of Winnie Toh (photo above) from Singapore who is herself a Certified sommelier by Court of Master Sommeliers and also received the WSET Advanced Certificate in Wines and Spirits as well as the Wine Spectator Awards of Excellence.

This occasion has made me realise how much material I have on the Maldives’ biggest guest country, China, so I am adding the tag “Chinese” today to bring together all these pieces.