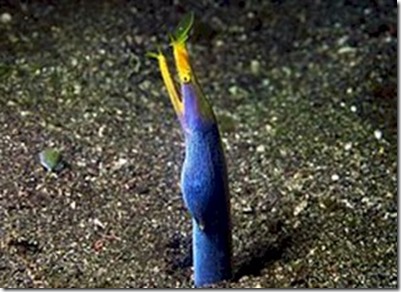 “On the reef, there is not only competition for living space, but a continual contest…it’s the arms race between them that…has produced today’s extraordinary diversity of form.” – David Attenborough, Blue Planet

Q: What small creature lives in a colony, has a “queen” who is the only one to lay eggs and others are specialized to perform particular tasks?
A: Bees?
Q: Buzzzzzz – Wrong. Sponge Shrimp. The piece below from BBC’s extraordinary “Blue Planet” provides a glimpse into the hive of activity for these underwater eusocialites.

This week, the crackerjack of the counterintuitive, Steve Fry, has announced his plans to step down from his iconic BBC series, QI. He will be replaced by a new queen bee/shrimp, Sandi Toksvig. This post here is the 6th instalment of the Maldives Complete’s special tribute “Maldives QI”. And the Latin word for “six” has provided this inspiration for today’s reef reproductive repartee.

Q: What gender is a black Ribbon Eel?
A: Male?
Q: Buzzzzz – Wrong.
A: Female?
Q: Buzzzz – Wrong.
A: ???
Q: Actually, black Ribbon Eels are juvenile and at that stage of their development, they have no gender. They are believed to be “protandric hermaphrodites” which is a creature which both male and female organs. But the juvenile has neither. It is only when it matures that it first becomes a male of the species. One could say that it literally “grows a pair”. You can distinguish male Ribbon Eels by their blue colouring (see above). But not for too long because as it matures even further, then it becomes a female of the species and changes colour once again to yellow. So at least in the Ribbon Eel world, the females are definitively the most mature beings of the species.

“Part Sex” is particularly fitting for the lead photo above where the tinges of yellow on the head indicate that this ribbon eel has started his/her/its transgender operation. 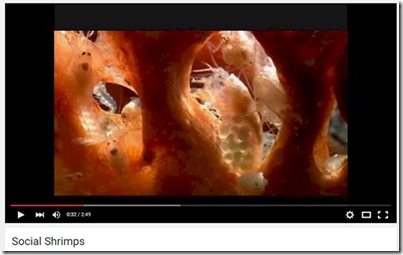 One Thought on “QI – Part Sex”