Best of the Maldives: Eco-Video – Kuramathi 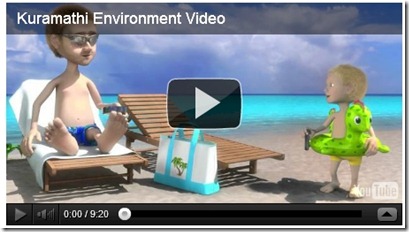 The children are our future and in Kuramathi’s latest eco-initiative, they are taking the lead in preserving it. Both in style and in protagonist. Kuramathi has produced a charming animated video on tips for preserving the environment in the Maldives. The style might seem a little…well…childish. But it works it still works on a number of levels. First, it’s not taking itself too seriously which keeps it entertaining and helps keep people from being turned off like some preachy or pedantic approach might do. Secondly, there is no speaking. This means that people from all countries and languages can benefit from it equally. It reminds me of the cartoon videos they now use for the safety briefings on the BA flights. A little cheeky, a lot useful.

“The 10 minute plot revolves around two characters, a father and his son holidaying on a tropical island. While they are lazing around, the father unknowingly and unintentionally harms the environment in each sequence, to which the modern day, ‘eco-aware’ child halts his action, supported by an eco-brochure and corrects him by fast forwarding to the distant future in a thought bubble. The child succeeds in informing his father the right way to protect and preserve the natural surroundings. A brief synopsis of each setting describes how important it is to respect the environment and how we can go about doing it. Each sequence gives off a subliminal message to its viewers. Employing proper snorkelling etiquette by observing the fragile coral garden from a safe distance, dispersing rubbish into litter bins, and respecting nature by not touching shells, corals and other animals are key notable messages portrayed in the movie. This original masterpiece was created by Thomas Krajcovic and Matej Petrek, two Austrian students, who was invited by the Kuramathi team to spend one week on the resort, in order to study the island, and its environment and dynamics, selecting the key messages to embed into the film’s storyboard. Under our senior marine biologists’ guidance, the plot was soon finalized and later taken over by the two students for the production of the film. Due credit is also given to the generous patronage by TUI – world famous European tour operator who supported this initiative by sponsoring the flights for the two students.”

Posted in: Best of the Maldives \ Tagged: best of, eco-sustainability, Kuramathi, video

2 Thoughts on “Best of the Maldives: Eco-Video – Kuramathi”