Best of the Maldives: Shower – Naladhu 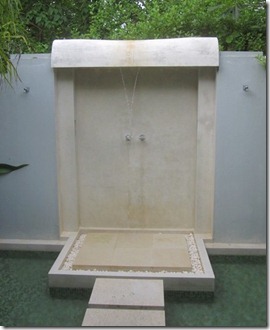 Given their prominent in escalating arms race of luxury at Maldives resorts perhaps ‘bathrooms’ should be called ‘showerrooms’. In the beginning there was the en suite shower. Standard and effective. Then, a resort got a bit adventurous and decided to locate the shower outdoors so one could go au naturel al fresco (to mix my languages a bit there). Then, more recently, a simple shower head was not sumptuous enough and ‘drench showers’ became de rigueur for the super premium properties. Now, actually, drench showers are yesterday’s fashion and the latest are waterfall showers for the leading edge.

Several of the top resorts splash out for the waterfall showers, but none quite so extravagantly as Naladhu. They have placed their marble (again, pretty standard for super-luxe class) shower in the middle of its own reflecting pool.

A little showering island on your island of paradise.

Posted in: Best of the Maldives \ Tagged: bathroom, best of, Naladhu

5 Thoughts on “Best of the Maldives: Shower – Naladhu”