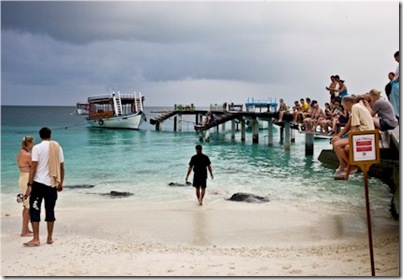 To feed or not to feed. That is the question of an increasing number of eco-activists. Certainly one problematic area of fish feeding is visitors taking it upon themselves to feed fish bread and other items purloined from the restaurant. This sort of ill-informed feeding can actually be very harmful as it can throw off the diets of these fish in subtle but critical ways. No visitor should ever feed a fish themselves.

However, fish feeding has been a common feature at various Maldive resorts. Typically around sunset, the resort will bring out kitchen scraps of fish and feed them to sting rays, reef sharks and other scavenger fish who quickly learned to show up for this routine feast. These feeding sessions are more informed about feeding the right things to the right species. But does that make it right? Some activists claim that even this apparently innocuous activity can have long term harmful effects on the species and the ecoysystem.

I’m certainly not enough of an expert to assess. Sometimes the argument is simply based on the principle that humans should interfere as little as possible in the natural environment. While I applaud that principle in general, I’m not of the belief that humans should never interfere with the environment. For starters, we humans interfere constantly without even knowing or trying. In order to remedy the environmental impact we humans have we need to muster broad based support for ecological initiatives. Sometimes the best way to muster this political will is to build rapport and relationships between the creatures and the humans. The ‘panda effect’ or ‘polar bear effect’. The more people fall in love with the natural world, the more they will be willing to support efforts to protect it. And seeing these creatures up close through fish feedings can be a way to enhance that affection for and fascination of them.

Fish feeding is done in a variety of ways. Kurumba used to incorporate it into their meal prep so that as they we gutting the days catch for dinner, the scraps were fed to a range of sharks and sting rays (they don’t do it any more). We always remember Filitheyo where they let the guests feed them (supervised and assisted). But Reethi Beach’s feeding time is so popular that it attracts guests from neighbouring resorts. More impressive, is that they have built a special viewing gallery for the comfort, safety and view of the guests. 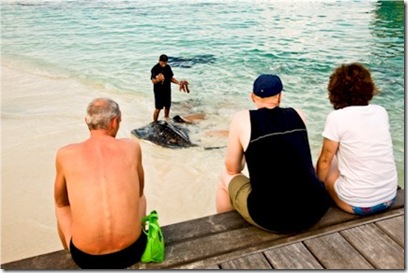 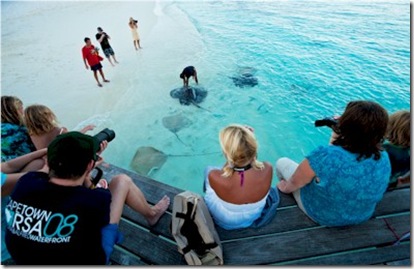 Posted in: Best of the Maldives \ Tagged: activity, best of, Reethi Beach