Best of the Maldives: Mantas – The Haven

Possibly one of the most placidly dramatic aquatic encounters in the Maldives is the graceful and commanding creature Manta Ray. Quite prevalent across most of the Maldives, we have seen them a number of times from shore. In fact, Conrad Hilton Rangali had a regular manta visitor who came every evening like clockwork to feed on the small sea life attracted by the lights of the dock. The resort guests would go down to watch the balletic display of this spaceship-like fish doing loop-the-loops underwater scooping up big mouthfuls (see picture below we snapped).

The YouTube clip above is from a National Geographic piece on Mantas in the Maldives which has great pictures and commentary. It provides good tips on ‘when’ to see Mantas (and other large pelagics like Whale Sharks). Unfortunately, the ‘best’ time for pelagic is the ‘worst’ time for weather, ie. the monsoon season. The seasonal rains spur the growth of the microscopic food on which these filter feeds feast.

If you can’t make it to Manta Point, but still want to regale in a spectacular show of these majestic creatures in the Maldives, MaldivesComplete has the scoop that BBC2 will broadcast ‘Andrea: Queen of Mantas’ on Wednesday 11 November 8 pm (if you do not live in the UK, check out the BBC iPlayer website to see if and when the programme will be broadcast over the Internet which many of their shows are now).

“Andrea: Queen of the Mantas tracks student Andrea Marshall over the course of a year as she dives the Indian Ocean unlocking secrets about the manta ray – a balletic cousin to the shark, with ‘wings’ which can span 7 metres (20 ft) wide…[R]evelations in the film include…the first tv footage of around 150 mantas massing near the Maldives…[in conjunction with the show] an online campaign seeking better safeguards for sharks and mantas is being run by The Save Our Seas Foundation, a main sponsor of manta ray research in Mozambique and around the Maldives.” 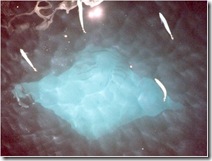 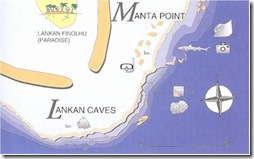 3 Thoughts on “Best of the Maldives: Mantas – The Haven”